So I was listening to Shade 45 on XM radio on the way to class today, and learned something that pissed me off pretty badly:

Apparently last night there was an airing of an Australian talent show called 'Hey Hey It's Saturday.' It's sort of like 'America's/Britain's Got Talent,' where people perform a multitude of talents in competition for money or prizes or sumthin like that.

Anyway, there was a performance by six white men doing a quote/unquote 'tribute' to Michael Jackson by performing as the 'Jackson Jive.' 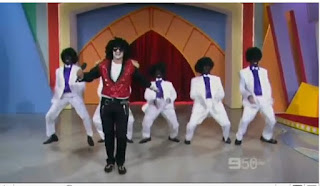 Anywho...as you can see, they performed in Blackface, followed by a 'modern-day' portrayal of Michael in whiteface. Now...here's what I have to say about all of this:

FIRST off, I want to give a HUGE shout out to Harry Connick, Jr. For those of you who don't know, this man is ranked as the 60th best selling United States male artist. He's a Grammy and Emmy award winner, as well as an established actor. I feel that he definitely represented the United States well, for as we ALL know, not EVERY white male in the United States would stand up for Black folk like that. :: round of applause:: 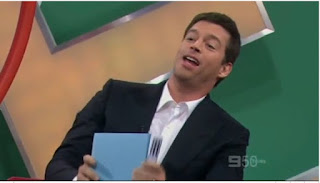 "Man if they turned up lookin like that in the United States....they'd be like 'Hey Hey There's No More Show." -Harry Connick Jr. HAHA


Now, as for my personal opinion. Naturally, I was offended and upset for a number of reasons:

Now...on the flipside, this isn't the United States. I don't know too much about Australia's history, so perhaps they are not as prone to be affected by racial sensitivity. BUT I do know that their history included having Black slaves, just like the US. With that said:

People get the definition of 'racism' mixed up a lot. 'Racism' by definition (NOT to be confused with 'ethnicity,' but that's another blog) is a dislike or hatred for people based on race. I think this was a severe case of racial insensitivity. These folks clearly have no idea of how their actions make Black people feel. They've probably had specific ideas about Black people their entire lives, may know few to no Black people personally, and just believe that all Black people are somehow LIKE that in one way or another. They cannot be put at fault for that, if that is the case. Predetermined ideas about a specific group of people shape the beliefs about and future behaviors towards that group.

Now, to address the Black folk and anyone else offended by this. What are YOU going to do now? I know a lot of you probably reacted by saying, "I'll beat their asses if I see 'em on the street!" or something of that nature. But think about it: What message are you really sending by reacting in that way? "Don't mess with Black folk?" Not hardly, my friend.

Guess what? By reacting that way you all are just proving these white folk right by reinforcing the negative stereotypes they believe about us. I applaud Harry Connick Jr. for doing what we ALL need to do: EDUCATING these white folk on how we REALLY are. We wanna simmer in anger and react in a negative way, because we are angry. I know. I've been the butt of many a racist joke before. I've been discriminated against, told outright that "No you can't because you're BLACK." I know how it feels. But being angry isn't working for us anymore. It's time to be smart about how we react to these negative racial incidents.

An example: I was in a class here at GSU about a year ago, and when asked about why test scores in Black schools aren't nearly as good as test scores in white schools, this girl raised her hand and said simply, with the utmost confidence: "It's genetic." This girl honestly believed that genetically, Black folk were just dumber than white folk. What did we (the Black folk) say? Not a word, but when class was over I noticed Black students venting to each other about it, and they looked at her with an evil side eye the rest of the semester. However, because NOBODY spoke up and educated this girl, guess what? She walked out of the class feeling the same way about it as she did when she went in. Actually, she was probably even more confident because nobody told her she was wrong, so she believed it was right. What's more, other white folk in that class, because nobody said she was wrong, probably walked out believing it also. In my eyes, that's OUR fault.

With that said, I'm going to conclude with this: I challenge every person of every race, from now on, to work on educating people on how their race really is, rather than reacting negatively and reinforcing the stereotypes. It won't be easy, not even for me, but it would be a start. I know that the "Jackson Jive" certainly learned something from all of this, thanks to Harry Connick Jr.