Showing posts from July, 2010
Show all

Welcome back to Earth, guys.

So not too long ago, Kanye West created a twitter account and has been tweeting randomly and relentlessly ever since. While I'm not following him myself, people RT (retweet, to those of you who have yet to join Twitter nation) this guy into my timeline constantly, and I've also browsed his page. He's a slightly eccentric lil somethin' (I don't mean that as a bad thing), but overall, the verdict is: He's just like everybody else. I think it's both amazing and refreshing how these "stars" seem to settle to Earth the more they connect with their fans. The hype dies down so fast once folks read the "regular" tweets. Huge celebs like Kanye, Chris Brown, Pink, Souljaboy and Justin Bieber.. who all tweet about what they're doing in their everyday personal lives.. have all proved to be *GASP* .. just like us!! ** SHOCKER ** I think this is a really good thing, though. I feel like people put "stars" on such a high pedestal, we te
1 comment
Check out the rest!

July 12, 2010
Seriously.. we have to do better. This is getting ridiculous. Like seriously.. who in the hell gave their auntie a webcam and an instrumental? Why? And on worldstar they say this lady looks like Eve. This is an INSULT to Eve! I don't know what's going on with blackfolk nowadays where we no longer respect ourselves, each other, or our opposite sex, but something's gotta give.
Post a Comment
Check out the rest! 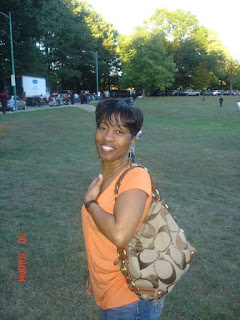 I'm taking this time out to recognize the most loving, supportive, gorgeous person I have ever had (and will ever have) in my life: my mother! Gloria Lorena Lowe.. there is NO ONE else on this Earth like my mother! There was a time where I wanted my life to be OVER (I've attempted suicide twice), but I chose to remain here because I knew that if I served no other purpose, it was to be here with her. Her love saved my life.. constantly. It's because of my mom that I'm where I am in life. I made it through school with 2 degrees and I'm now on the road to being a successful preschool educator because my mom was the only one who supported me 100% and saw me all the way through. I wanted to give up so many times because everybody else was making me feel like I was crazy for staying at home and finishing up. I almost quit and moved out, just to prove to everyone else that I could be an "adult" and join the work force if I wanted to. Now, as my mom told me back
1 comment
Check out the rest!

Did anyone else laugh a little??

July 07, 2010
I did. I stopped myself.. but I did.  -Essence shrug- Even though I say that celebrity's private issues are none of our business, I DO believe that the bourgeoisie (especially the upper UPPER class) need to stop believing that they can get away with every damn thing. They are not God, they don't make the laws and they SHOULDN'T have to buy their way out of everything. That's just my opinion. Still, I can't help but think that we are about to see another Paris Hilton situation here. She'll be out within a week, I can feel it. SMH.
Post a Comment
Check out the rest!

This is my brain on.. deep.

It dawned on me last night that I'm sort of missing being in a relationship. It also dawned on me that I spend a lot of time blaming everyone else for the fact that I'm single, and while I still believe that is partly true, I came to the realization that yes.. it's my fault too. I think I house FEAR. I found myself wondering: What the hell is the REAL reason why I'm single? I've been single over 4 years now. I didn't know myself then. I thought I knew myself now, but now I'm not so sure. Have I found myself? Am I the new, confident Essence I always wanted to be? Am I really? Or am I still holding myself back. What the fuck am I afraid of?? One thing I DO know is that I should be more than willing to go above and beyond for the one I'm with, but I think I'm so afraid of NOT getting the same in return, I still have this defiant thing going on. I was always pushing the envelope and putting every ounce of my power into keeping "us" alive..
Post a Comment
Check out the rest!

July 04, 2010
I just came across this video on worldstarhiphop talking about the BET Award's connections with the Illuminati. It links artists like Kanye West, Drake, Ludacris, B.O.B., and even Monica and Yolanda Adams to the organization! Check it: What do you think? Is it Illuminati or are these people just reaching?? Personally, I think most of the connections they have here are wayyy reaching. I also don't really believe in the Illuminati either. However, I like to play it safe by keeping my eyes and ears open and my guard up a little. I've seen some things personally in connection to this shit, so you never know..
4 comments
Check out the rest!

Cancer from Eating the Box?! FOH

July 02, 2010
PLEASE.. every single DAY the news releases new ways that you can die. Every day my mom hits me up asking me not to do something or to start doing something because the news (or Oprah) says I could die otherwise. Now they tryna fuck us women up by scaring men out of going down? But male ejaculate is supposed to be healthy for you, right? Protein nshit. CLEARLY a man conducted both of these damn studies. SMH Here's what I say, ladies & gents: LIVE LIFE!! As long as it's legal, do what the FUCK you wanna do! We all gotta go sometime, and God makes no mistakes. When it's our time, it's our time, and as long as you're living life the best way you know how there's no way God is gonna make it happen any sooner or later than it's supposed to happen. *drops the mic*
1 comment
Check out the rest!
More posts