Showing posts from February, 2010
Show all

Black Children are an Endangered Species???? 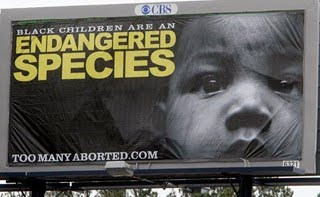 So I just finished watching this ABC News broadcast about the billboards being put up all over (UNDERPRIVILEGED) Black communities that have the face of a Black child with the words "Black Children are an Endangered Species" along with the website "TooManyAborted.com" under it. The billboards were created and put up by Black MEN and are friggin everywhere! EVERYWHERE among Black communities.. POOR Black communities in particular. SMH. If you follow me on Twitter, some of you may already know that I am currently working as a Bus Monitor and Sub. Assistant Teacher at a preschool over in one of Atlanta's more underprivileged areas. I see literally FIVE of these damn billboards up on my route ALONE. Now what's wrong with this picture?? PLENTY. Let me tell you just a couple things: For ONE.. the statistics on ABC say that Black women were 1.5x more likely to get pregnant and 3x more likely to get an abortion than white women. I say that the issue here is not
2 comments
Check out the rest!
More posts