Showing posts from September, 2009
Show all

Somethin Ain't Right with the World...

So I meant to talk about this a while ago, but I’ve been sooooo busy at school (and these KILLER EXAMS! UGH) that I just introduced my WTSH segment of my blog. But anyway, while I was on my way to school the other day, I heard something on the Frank & Wanda show on V-103 that was so disturbing I had to exclaim ‘OH MY GOD!’ out loud and almost cried. It is a sad, sad day when the spawn of Dr. Martin Luther King Jr. and Coretta Scott King (whom Frank Ski called ‘OUR first family’) take each other to court. And the things that I heard…ladies and gentlemen Dr. & Mrs. King have to be turning over in their graves right now. As it turns out, a bunch of personal items of Dr. & Mrs. King were found, including a collection of love letters mailed between them back BEFORE Dr. King became who he was. Back when he was courting Mrs. King. Apparently, their oldest son, Dexter, wants to PUBLISH these letters, as well as get some book, autobiography, AND movie deals going. Dexter King.
Post a Comment
Check out the rest!

What the Sam Hill??? 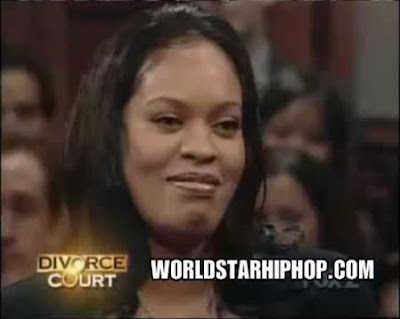 So I decided to do a feature on my blog called 'What the Sam Hill?' For those of ya'll that don't know, that's a country term for 'What the hell?' lol Anyway this is the very first 'WTSH' entry. It is a woman on divorce court who is divorcing her husband for being 'TOO NICE,' as she put it. CLICK THE PHOTO TO SEE THE VIDEO I don't understand it. I haven't heard this much ignorance since my homegirl said the same thing to me that this lady is saying a few years ago. I set her up with a friend of mine and she ended up breaking it off because he wasn't 'mean' enough to her. Whenever they argued, and she was right, he would...omg...SAY that he was wrong! She literally said she wanted to get cussed out and called a bitch from time to time. For real, ladies? I'ma need all the ladies to step their games up immediately. This is SAD.
Post a Comment
Check out the rest!

Look at him...with all his awesomeness. I'm extremely irritated about the big controversy of the day: Obama's Back to School Speech. I dunno what's going on in other parts of the country, but in the South they actin like Obama is gonna tell the kids to do something crazy and dumb like...um...continuing to drop outta school early and having babies outta wedlock or sittin in class not knowing what the fuck the teacher is talking about and cheating on these dumb ass standardized tests to get by. You know...the same shit they been doin. For those of you who don't know, in GA, Forsyth county is refusing to show the speech in their schools, while some other counties are opting to leave the decision to parents. All he's going to say is 'STAY IN SCHOOL!!!' This is the type of message we wanna keep from our kids? SERIOUSLY??? I was listening to Frank Ski on V-103 this morning and he made the greatest point ever: I don't recall schools ever asking the par
Post a Comment
Check out the rest!
More posts