November 20, 2010
Everybody knows that I spend a lot of time on Twitter, tweeting my life away. Sometimes I talk about real shit, but I’d say for me 75% of Twitter is strictly entertainment. I tend to follow mostly people that I know, and only people that are also following me, with the exception of some news accounts and Twitter troubleshooting pages. With that said, here are the 20 people on Twitter that I find the most interesting. You should follow them too! Keep in mind, these arent in any particular order.
1. @NikaDiva 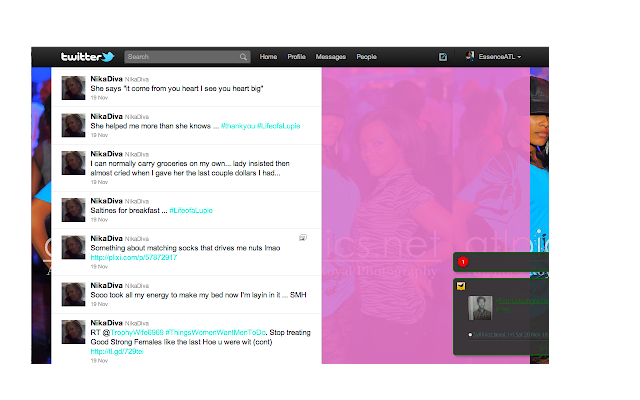 Nika is my sister and best friend.. the Yang to my Yin, but that is not why she’s on my list. A fiesty ass lesbian, people who follow her are definitely guaranteed to be entertained lol. As sweet as my sister is, she’s a firecracker who sounds off on whatever is pissing her off at the time. She is also living with Lupus, so follow her to get a better understanding of the condition.
2. @kellz314 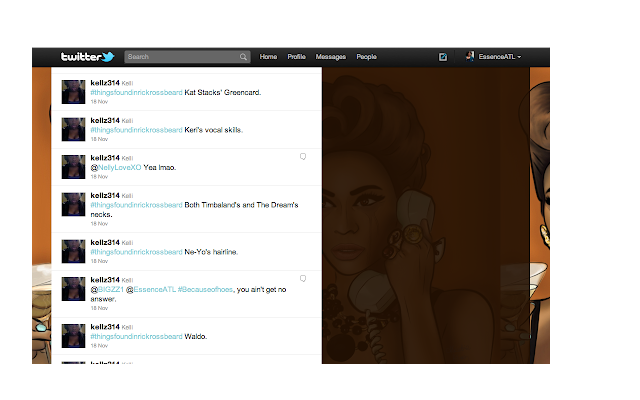 Kellz is another homegirl of mine. We’ve been friends for about 4 years now. She’s on my list because she is fucking hilarious. Anyone who follows her will tell you that she rivals your favorite comedian as the funniest person on Twitter.
3. @actorbrianwhite 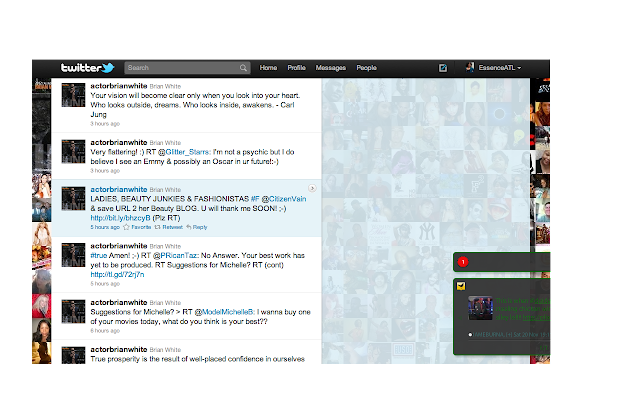 You may best know Brian White from the movie Stomp the Yard and CSI: Miami. He started following me after he popped up on an episode of Ghost Whisperer that I was watching and I commented on how fine I thought he was, so I followed him back. What I found was there was way more to him than looks. This is a man with a message. He exudes an air of intelligence through his tweets that puts these “men” I deal with out here in Atlanta to shame. I love a man with something to say. Follow him if you think there are no good men left. (He just got married, so he’s no longer available either. I’m just saying.)
4. @JuicyRoyale 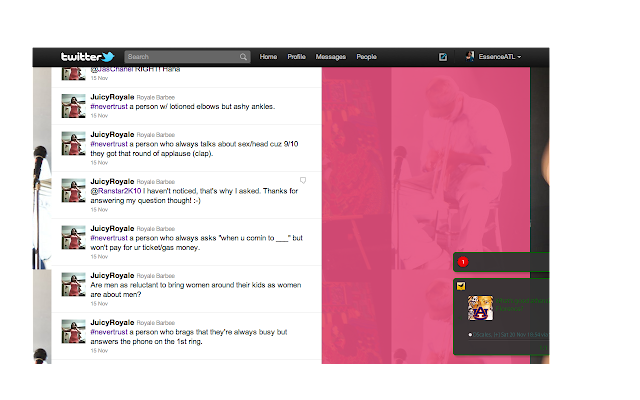 My friend of over 10 years, Royale is on my list because she’s always posting something, clever, hilarious, or purely entertaining. Her sarcasm is the best! She also stays coming up with interesting topics about sex & relationships that spark great “twonversations.” Never a dull moment. Be sure to check out her blog as well!
5. @Mstiffevans 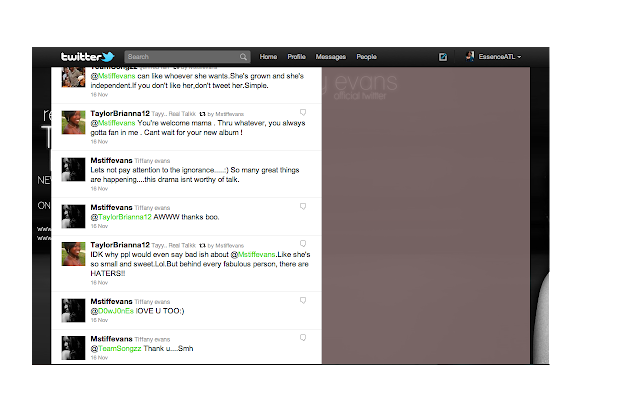 Singer Tiffany Evans is on my list because, aside from the passion she has for her craft, she gets my vote for most positive person on Twitter. When it’s so easy to send messages on anything and everything to the world, here is someone who manages to have nothing bad to say. I have never seen an angry, or even agitated tweet from her. Drama-free positive people inspire you to do the same.
6. @kyfinis859 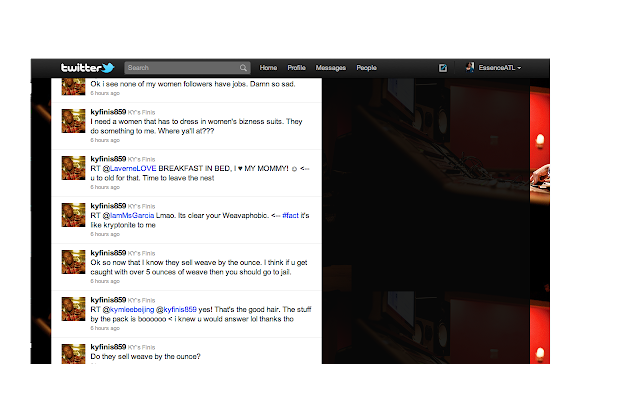 Probably known best to you all as being a Young Money engineer, the homie KY makes my list because of the quality of the things he tweets about. Older and more mature than most other people I know, it shows in his tweets. He educates his followers on the “industry” and the evils of things like weave and starts mini-movements such as #TeamRealHair, of which I am a proud member of!! :o)
7. @RickeySmiley 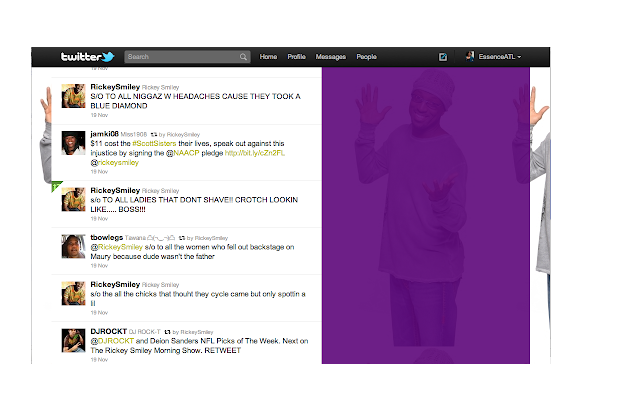 What can I say? I’m pretty sure everyone knows this guy and why I’m following him. lol. However, I think that what a lot of people DON’T know about Rickey Smiley is his knowledge and passion for politics and current events. He sounds off on topics daily, both on twitter and on his morning radio show (which I tune in to every morning, I might add). Follow him and learn something!!!
8. @LaverneLOVE 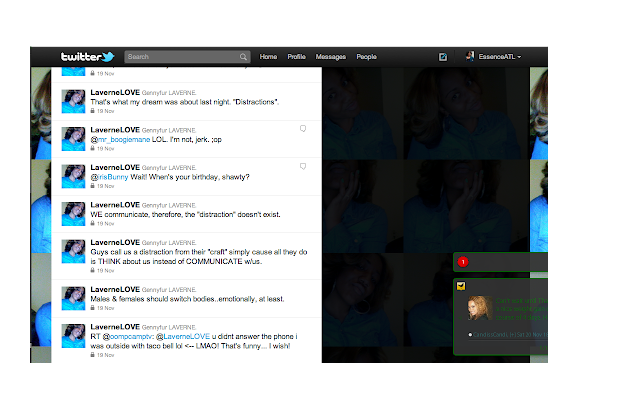 Miss Gennyfur is another good friend in my personal social circle. We call each other our “ride or die.” Wherever we go, we have fun, no matter WHAT. The reason why she’s on my list, though, is because she is always good for a conversation-starter as well. She always keeps it real and censors NOTHING. Plus the tweets she puts out throughout her day are hilarious, especially when she’s out & about at night!
9. @iAM_BART 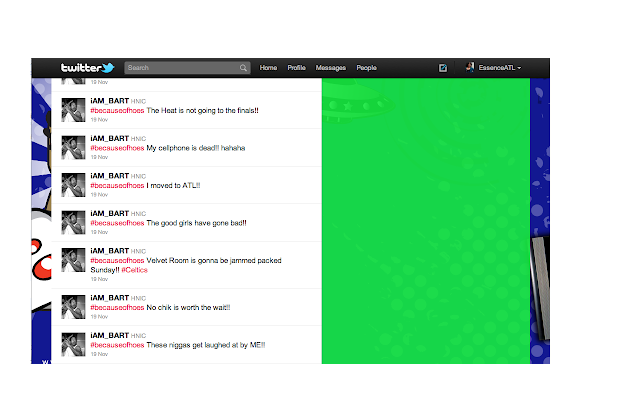 Remember those “Free Bart” t-shirts?
Bart is on my list because his sarcasm and brutal honesty makes him one of the funniest and most entertaining guys on Twitter. As funny as he is, lowkey he’s serious about a lot of the stuff he’s saying. He also has an awesome blog you should check out!
10. @Jnicks & @ETCALI 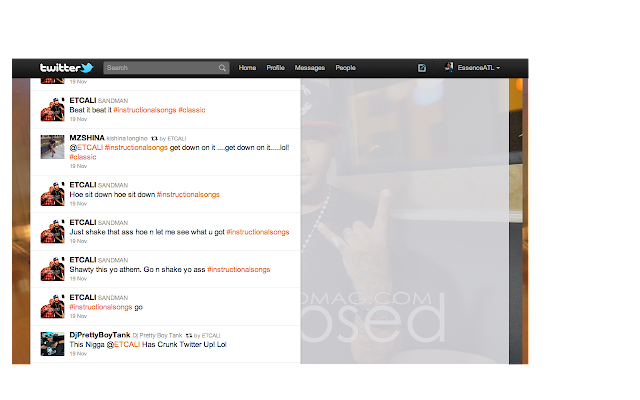 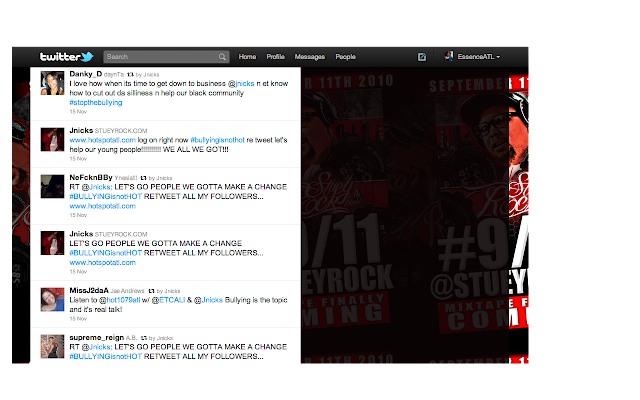 ET & JNicks, known as The Durrty Boyz, are the hosts of Atlanta’s top evening radio show. I put these two on my list together because they’re on my list for the same reasons. They are the voice of Atlanta nightlife so follow them if you want to know what’s poppin. They are pure entertainment on Twitter, always joking and clowning the shit out of folks.
11. @EuroTone 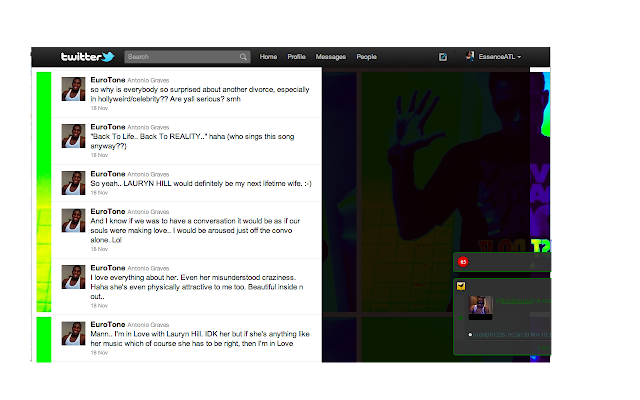 Antonio Graves plays pro basketball overseas. Mature and intelligent, he makes my list because of all the compelling and intriguing things he has to say. He’s one of the few guys I know my age that still believes in love & relationships, and tweets about it. That’s something that you all know I definitely respect and appreciate!
12. @brookandthecity 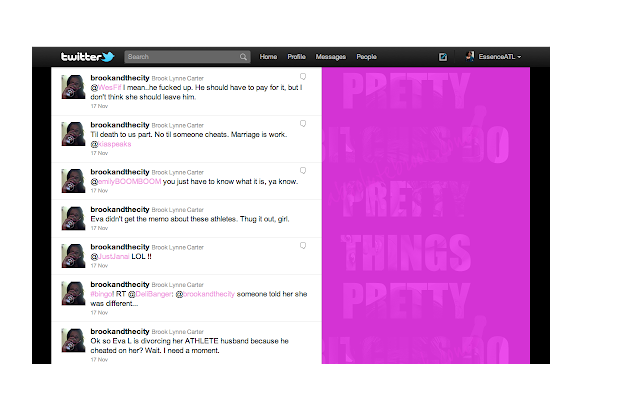 Brook’s definitely has the gift of gab and her wit, which she expresses on her very popular blog, has earned her a bevy of fans and, recently, her own show (with Miss Jia) on BeeHive Radio. She has single-handedly started a number of trends on twitter, including the #girlWHAT term that I now use. I, personally, “l-ve” her. lol
13. @FlyPublicity 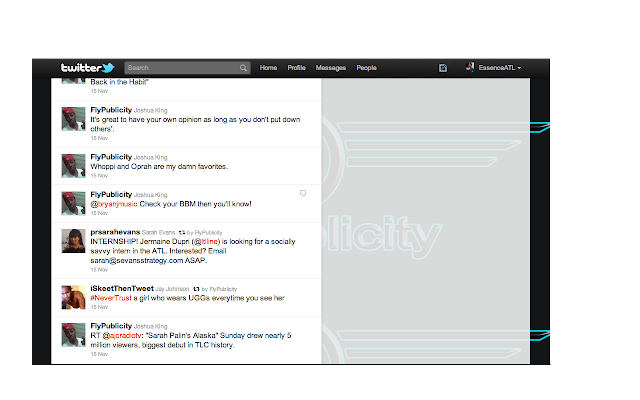 Publicist to R&B singer Sammie & rap group Travis Porter, to name a few, my homie Josh King is largely respected in “the industry.” He’s on my list because he stays on top of all things entertainment, and will tweet about new music, video shoots, industry events, and whatever else may interest the people. He’s always clowning folks at events or while he’s out & about. Hilarious! Plus, his quotes and #TeamJesus tweets are greatly inspiring.
14. @MarioSoulTruth 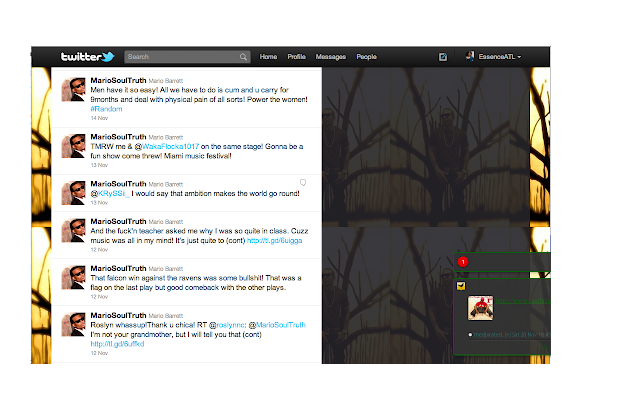 R&B singer Mario mostly tweets about what he’s doing as he’s doing it, but every once in awhile he’ll hit you with some really awesome quote or something deep. Things that make you go “hmmm..” I like people who say thought-provoking things.
15. @BOOGIESWORLD 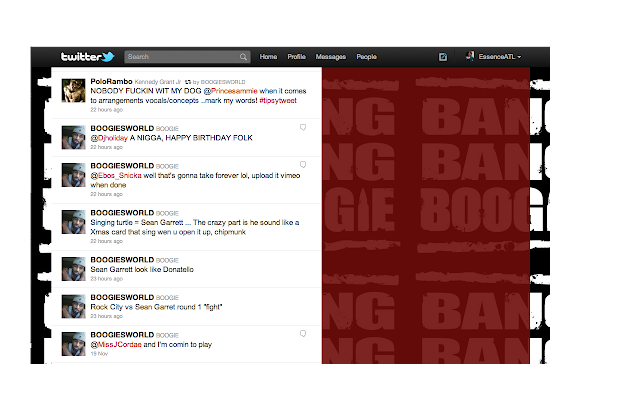 Known to R&B singer Sammie as his “right-hand,” he does everything. Boogie is on my list because.. well.. dude is just fucking funny! In real life and on Twitter. He tends to sound off about things that grind his gears, and will call out the stans that bother him about Sammie. On top of all that he is one guy who knows this industry quite well, so besides laughs you should follow him in order to stay informed about that kind of stuff.
16. @justmissparis 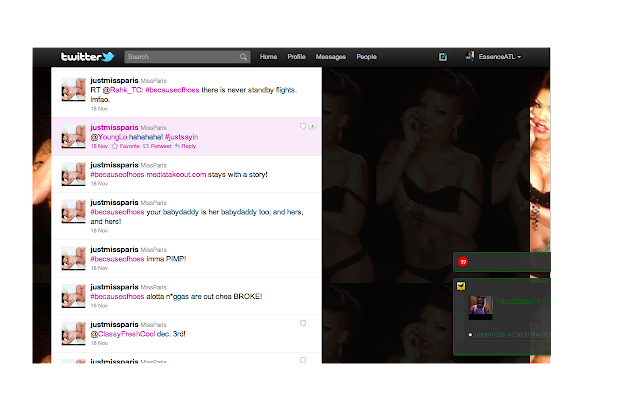 Paris gained thousands of fans and nearly 25,000 followers on Twitter simply by being herself, which gains respect from a lot of folks, including myself. Gorgeous and covered in tattoos, folks just cannot get enough of her. Her blog shows her deep, intellectual side with poetry and artwork that brings an entirely different fanbase to the table as well. From a personal standpoint, I find her quite genuine. She’s always been really good-natured and friendly with me, so she’ll always be cool in my book.
17. @oompcamptv 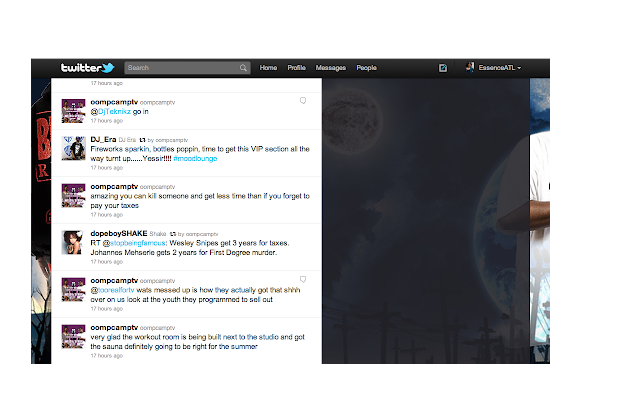 Calvin “the coordinator” is part of the legendary Big Oomp Records and a good friend of mine for some years. He’s on the list because of his profound knowledge of music and “the industry.” Follow him to get educated on some things you didn’t know before.
18. @twitter, @spam, @safety, @TweetDeck 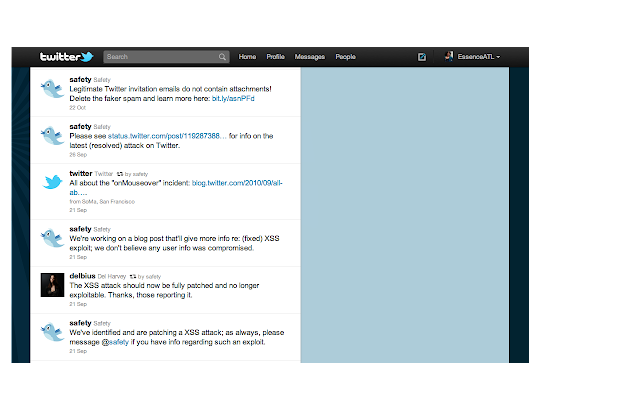 I follow all of these accounts to keep updated on all things Twitter. Whenever something goes wrong with Twitter, one of these accounts will speak up. I use Tweetdeck so I follow it for the same reasons. I know which links not to click and how to avoid fucking up my computer because of the Spam and Safety pages.
19. @Arithemack 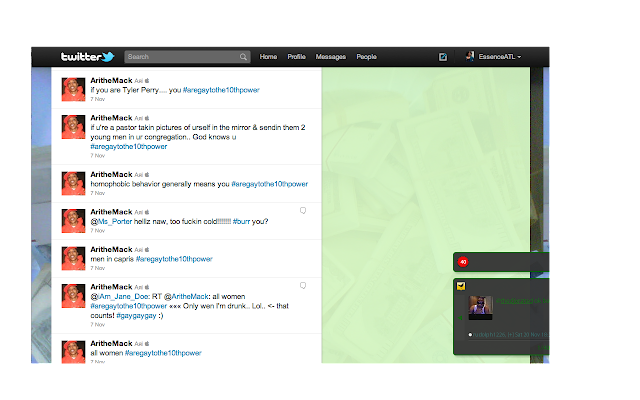 Another of the brutally honest, fucking hilarious ones. Ari’s tweets keep me laughing all the time, even though I don’t really broadcast it. I laugh out loud every time Ari pops up on my timeline.
20. @CNN, @cnnbrk, @wsb_tv, @cbsatl, @BreakingNews 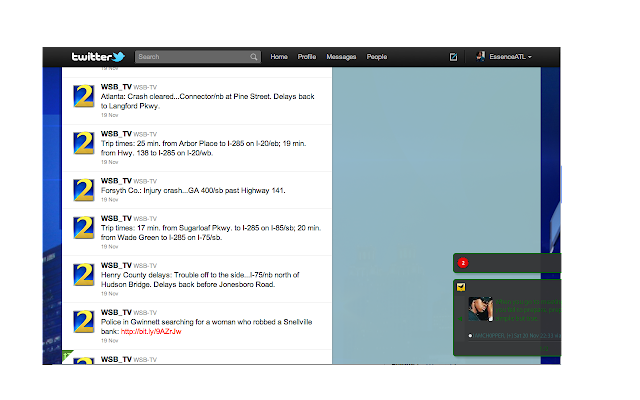 I like to keep up on current events, and I can do that on Twitter faster than I can on TV nowadays. Also, with my job I have to be on the road around 6:15 and local news pages like @wsb_tv and @cbsatl give traffic reports along with the news.
So.. there you have it! Go follow all of these people to be just as entertained as I am on Twitter!! :o)
*Honorable Mentions (who should also definitely be followed):
@MrStealYaChsCke
@IAMCH0PPER
@jrstarcamper
@Lex_fromBLISS
@lisafuckingli
essenceofessence 20 folks im following that you should follow too