We can do better, but we don't. 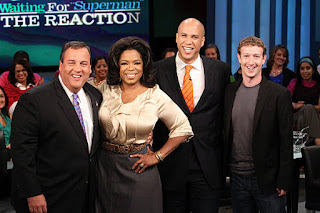 So I'm sitting here watching this awesome episode of Oprah where she and a bunch of other people are addressing the fucked up American educational system. There was a big announcement buzzing around the media that has just been confirmed by the Democratic Mayor and Republican Governor of Newark, New Jersey and Mark Zuckerberg, the Founder and CEO of Facebook. Mark Zuckerberg is giving $100 MILLION FREAKING DOLLARS towards the effort of improving the struggling schools in Newark. He wanted to remain an anonymous investor, but Oprah herself, along with the politicians involved, convinced him to identify himself as the investor publicly in hopes that other rich & wealthy folk follow in his footsteps.

And as I watch this I'm watching my mom cry.

It's definitely a beautiful thing. As a teacher myself I've been waiting for the rest of the world to obtain the same dedication as me to improve the lives of these children. But on top of all that there's another reason why my mom is crying.

Let me first tell you about what I've learned about Mark Zuckerberg. He started Facebook while a student at Harvard, right? Now he has a net worth estimated at $6.9 billion. Not 6.9 million.. BILLION. Oh, and he is 26 years old.. just one year older than lil' ol me.

NOW the 6.9 billion dollar question: What do you think black folk would do with that kinda money?

The answer is another reason why my mom is crying.

Black folk with millions of dollars spend it on stupid shit like ridiculously expensive cars, clothing, jewelry, and unnecessarily huge houses. Zuckerberg just showed his home to Oprah's cameras. That man lives in a house with his wife that looks smaller than MY HOUSE.

And not to say that rich people of other ethnicities don't also do the same thing, but what I'm saying is I get tired of folks in Black entertainment always talking about putting on for his or her city. A LOT of them say that but at the end of the day all they're trying to do is rep. Their idea of putting on for the city is getting their local football team's logo tatted on their necks. And I'm sorry but it's more than buying turkeys for a neighborhood on Thanksgiving or helping serve the homeless on Christmas. Mark Zukerberg is using his wealth to generate REAL CHANGE.

I can only hope that Zuckerberg's donation starts a chain reaction across the United States. A chain reaction of support for our educational system and the children currently engrossed in it. There are a lot of little somebodies around that will be running this country for us one day, and no one seems to care how they do. And I'm challenging the rich black folk to start thinking bigger than haircuts and bookbags and foundations that only include the occasional appearance or concert. Stop waiting until something big happens to jump up and take action. What's been happening here is way bigger than that, reified into a system that's unchangeable. Ya'll can do better.. you just don't. And I think it's selfish, quite honestly.

Thoughts?
essenceofessence we can do better